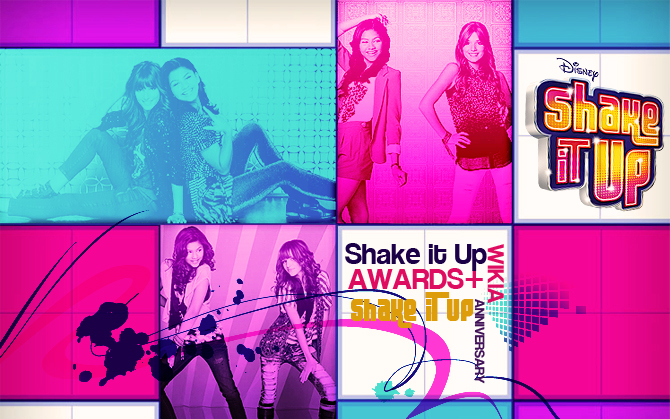 Welcome to the Shake It Up Wikia Awards! This is a special event/blog because It's Shake It Up Anniversary! And I thought that I should made this up. I'm your host, Shaheim and I'll be posting a blog post for the voting right here on this wiki. Here are some of the information that you'll want to know:

The Shake It Up Wikia Awards will start taking some nomiees on November 9, 2012 for some of the categories. To find out how to nominate, scroll down to the "Nomination" header. On November 21, 2012, Voting polls will opened at 5PM Eastern Time. The voting will end December 27, 2012. The Awards winners will be posted on December 30, 2012 at 5PM Eastern Time.

The best actor in the series. Can include Main or Minor cast.

The best actress in the series. Can include Main or Minor cast.

The best guest cast in the series. Includes only cast that appeared for only a maximum of three episodes.

The best pairing in the series.

What episode was your favorite? Includes all the episodes.

Best Shake It Up Song

Shake It Up has a lot of amazing songs that just makes you wanna dance! what Shake It Up song you think is the best?

Think you're a hardworking, committed user to the community? Well then you're a possible nominee! Requires a minimum of 500 edits.

Who do you think is the most faithful admin to this wiki? Well then nominate them to this category. Only for admins.

Many have done Fan Fictions that are just amazing. Here is your chance to get discovered! Nominate your favorite fanfic related to Shake It Up. Fan Fiction must have a title in able to be eligible for nomination.

Retrieved from "https://shakeitup.fandom.com/wiki/User_blog:-shaheimrocksitup/Shake_It_Up_Wikia_Awards_%2B_Shake_It_Up_Anniversary?oldid=122614"
Community content is available under CC-BY-SA unless otherwise noted.