Now that they're no longer going to be related, Rocky tries to convince CeCe and Logan to get along so that she and Logan can date. Meanwhile, Flynn and Deuce invite Tinka to be the lead singer in their air guitar band.

Rocky tries to get CeCe and Logan to get along so she can date Logan. Logan becomes Rocky's boyfriend, but when Rocky suggests a double date between the girls, CeCe brings someone Rocky can't stand on purpose which is Casper Carrington III, the guy that always beats Rocky at the Academic Decathlon. CeCe and Rocky talk privately about why CeCe brought a guy Rocky can't stand, then CeCe asks why Rocky was dating a guy that she can't stand. They both agree to give each others guys' a chance. Logan gets upset because Rocky was paying more attention to Casper than she was to him, and Logan leaves the date and Rocky decides to leave too. Meanwhile, Flynn and Deuce invite Tinka to be the lead singer in their air guitar band. In the end, Flynn, Deuce, and Tinka's band loses the competition, and Rocky breaks up with Logan, since CeCe agreed to give Logan a chance, but Logan refused because he thought that CeCe sabotaged his badminton game on purpose, which was an accident.

The image gallery for Love & War It Up may be viewed here. 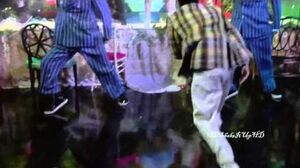 Retrieved from "https://shakeitup.fandom.com/wiki/Love_%26_War_It_Up?oldid=284221"
Community content is available under CC-BY-SA unless otherwise noted.