Little Scooter (by Jeremy and CeCe)

Logan Hunter, portrayed by Leo Howard, appears in multiple Season 3 episodes of Shake It Up. Logan is the son of Jeremy Hunter and was going to be CeCe Jones and Flynn Jones's stepbrother and Georgia Jones's stepson until I Do It Up, when Georgia and Jeremy don't get married because they felt that they rushed into their relationship. Logan and Rocky ended up dating for a short time, before breaking up because CeCe gave Logan another chance and Logan didn't, as he didn't believe her. In Future It Up, Logan enters, revealing that he is CeCe's husband, they got married, and their son L.J's name stands for Logan Junior.

Logan is shown to be a likable guy. He is seemingly calm, sarcastic and loves skateboarding. Despite this though he is also very disciplined and dedicated to whatever he does. He seems to be a stickler for rules, but that doesn't mean he doesn't know how or when to have fun. He's mostly a nice guy, although will get annoyed if pushed. He dislikes CeCe because he thinks that she has a lack of work ethic. Despite this, he is friends with Rocky. He also seems to like Flynn, due to their similar personalities. Logan also has a tendency of saying "ZAM!" when he is happy.

Relationships With Other Characters

Logan has a better relationship with Rocky than with CeCe. He was impressed that she managed to get the kebabs in the correct order, when working, although he looked a little annoyed when she tried to stick up for CeCe when she was late. In Clean It Up, Rocky accidentally kissed him to which he smiles and says "Zam!", meaning that he liked that she kissed him, which makes things awkward for Rocky. Then to her surprise, he kisses her back at his own free will. This will allow their relationship to be further explored. In I Do It Up, Logan begins to discuss his relationship with Rocky and falls for her even more, but Ty keeps interfering. Logan's feelings for her continue to grow. In Love & War It Up, Rocky tried to convince him and CeCe to get along so he and Rocky could date. In the same episode, Rocky becomes Logan's girlfriend but also breaks up with him because he refuses to give CeCe a chance, whereas CeCe gave him a chance. (See: Rogan) 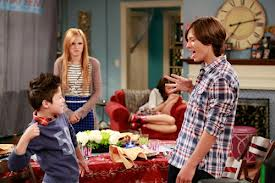 Logan and Flynn were happy to become stepbrothers because Logan took Flynn to go skateboarding and he said that CeCe was jealous because he and Flynn have a better bond. Flynn gets along with Logan better than CeCe. They didn't become stepbrothers after CeCe's mom and Logan's dad didn't get married. (See: Fogan)

Logan and CeCe have disliked ea

ch other ever since Logan fired CeCe in Oh Brother It Up, not knowing that CeCe was his dad's girlfriend's daughter. Cece and Logan are shocked and annoyed to find out that they will become siblings. Logan called CeCe lazy and CeCe said that Logan thinks he's so cool when he's not. However, despite their rivalry, they share a few things in common, even though they get on each other's nerves. It is revealed in Future It Up that Logan and CeCe get married and have a son together, named L.J. (Logan Junior) (See: Cogan)

Logan and Ty first met in My Fair Librarian It Up, when Flynn called Logan to help with building the soapbox car. Later, Ty seems to be jealous of Logan, because Deuce said he's cool. Later on, Flynn told Logan and Ty to try to go with it, which they accepted, and they managed to form some degree of friendship. However in Clean It Up Ty first saw Logan kissing Rocky on the cheek, this has left Ty with a negative opinion of Logan, in the said episode he dragged him away, to get him away from Rocky. In I Do It Up. Ty is still hostile and antagonist towards Logan, an Logan is intimidated by him, due to his stress on keeping them apart. (See: Tygan)

Logan and Deuce first met in My Fair Librarian It Up and Deuce started looking up to Logan when he revealed he had experience building soapbox cars. Deuce even wore the clothes that Logan had been wearing the day before. (See: Deugan)

Logan is portrayed as a businessman. He is happily married to CeCe and has a son, L.J.

I Do It Up

The image gallery for Logan Hunter may be viewed here.

Userboxes for Logan Hunter may be viewed here.

Retrieved from "https://shakeitup.fandom.com/wiki/Logan_Hunter?oldid=283346"
Community content is available under CC-BY-SA unless otherwise noted.