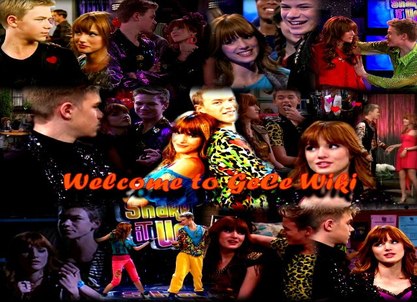 GeCe has been marked as the longest article on the Shake It Up Wiki!

GeCe is the most commented article on the Shake It Up Wiki!

GeCe (G/unther + C/eCe) is the romantic pairing of Gunther Hessenheffer and CeCe Jones. Gunther and CeCe maintain a love/hate relationship, and they are frenemies at the moment, although Gunther has shown signs of liking CeCe, and CeCe liking him. Gunther and CeCe show many signs of affection, for instance, they constantly smile and stare at each other, plus, they continuously stand closely together. Also, Gunther checks CeCe out whenever he's around her, and CeCe has also been seen checking Gunther out. It's more than likely that they are into each other. Many fans and some writers see a huge potential and a future in this relationship pairing and this is the most popular ship on the show. GeCe is shown to be the strongest love/hate relationship on the show and is supported by most of the Tynka, Reuce, Deucina and Rogan shippers, and is multi shipped by most of the DeCe shippers.

They have gone out once in Hot Mess It Up when CeCe and Rocky made a teen advice show called, You're a Hot Mess and We're Not! The two thought that Gunther was leaving back to the old country because of some bad advice CeCe gave him on the Webcast. Rocky tells CeCe to ask him to the dance and try to get him to stay. They seem to have a lot in common and get along with each other for the most part. Kenton Duty, who plays Gunther, has acknowledged the pairing in his interviews and even given a couple of hints for a centric episode (Split It Up, an episode where Gunther and CeCe dance together) before it first aired, saying that it was something that the fans have wanted.

[1]In the episode Reality Check It Up a national TV show claims that CeCe has a crush on Gunther. This episode showed that Gunther still has some feelings for CeCe and he still isn't over her from when they had gone out. In Surprise It Up, Gunther and CeCe go to a mailman's funeral together. It's majorly hinted that Gunther and CeCe will get together at some point in the show seeing as Gunther likes CeCe, and clearly, the writers are thinking about making Gunther and CeCe happen, seeing the episodes Hot Mess It Up, Split It Up, Reality Check It Up and Surprise It Up. As the show goes on you can see more and more that they may have feelings for each other. Even the smallest of moments, such as the one near the end in Auction It Up could be major and subtle hints that Gunther and CeCe will end up together. GeCe has many loyal fans (the GeCeBaybees) as well as Its Own Wiki!

They are portrayed by Kenton Duty and Bella Thorne.

♡Refresh for another GeCe Quote♡

CeCe often thinks that the way Gunther acts and dresses is abnormal or "awkward". She once tried to get him deported, and also she has put bugs in his sandwhich (Hot Mess It Up). When she mistakenly thought that Gunther was about to leave the country, she felt guilty because of the bad advice she gave him (which was really to his cousin) and in order to help him stay she went out with him. In Vatalihootsit It Up, because the holiday tradition requires one to pay compliments to an enemy, she compliments him, saying he can really pick a shirt. In  Auction It Up, CeCe says that Gunther is nice and caring. In Reality Check It Up, she is seemingly grossed out after the TV show claims that she has a "crush" on Gunther. In Made In Japan, when Tinka was about to be deported, Gunther was upset and CeCe jumped in to protect them, which shows that she actually cares about Gunther (Tinka). Basically she was doing all this for him so he can stay happy.

Gunther often makes fun of CeCe, such as making comments about her bangs and her dancing. In Hot Mess It Up, he is at first suspicious when CeCe asks him out, but then he accepts it. He seems to be happy during their date, giving CeCe the nickname "little cookie", buying her a cookie, and calling her the future "Mrs. Hessenheffer". Later, during their slow dance, he states that he is having a wonderful time. In Split It Up, when CeCe compliments Gunther when they were dancing, Gunther tells CeCe (about her dancing), "You can only be as good as your partner." Despite the show showing that Gunther hates CeCe, his true feelings for her come to surface in Reality Check It Up. Gunther doesn't seem disgusted after the TV show claims that CeCe has a crush on him. Gunther feels confident in himself so he takes that risk to flirt with her by putting an arm around her shoulder, attempting to feed her a cookie, spraying his mouth with breath spray which was an attempt to kiss CeCe, and telling her that he loves how she plays "hard-to-get"; showing that he still isn't over her and still has feelings for her from when they dated. He was looking forward to the kiss, but CeCe ruined the moment by trying to prove him that she doesn't have any feelings for him. In Surprise It Up, he invites CeCe to his mailman's funeral, claiming that Tinka was out of town and all his other friends were busy. Later on in the episode, he calls CeCe his friend. He also attends to her birthday party after "Porky" chased after him which leaded him to CeCe's apartment, even though he could have just ran straight to his apartment.

Similarities between Gunther and CeCe

Hot Mess It Up

Three's a Crowd It Up

Double Pegasus It Up

Copy Kat It Up

Parent Trap It Up

Reality Check It Up

Rock and Roll It Up

Merry Merry It Up

Home Alone It Up

Episodes with a GeCe Plot/Subplot

CeCe: We are the best dancers in Chicago!

Hot Mess It Up

Gunther: I am Gunther!

CeCe: And I am Gunther's girlfriend...

Rocky: And I am loving this!

CeCe: (Gunther gives her a cookie) Awww, thank you Gunther.

Gunther: Please, nothing's too good for the future Mrs. Hessenheffer!

Rocky: Oh, hey Gunther. Where's CeCe?
Gunther: She's in the hallway. You know that one, she likes to make a big entrance. CeCe, darling, your BF and your BFF are waiting for you!

CeCe: (From the hallway) I'm good in the hall!

Gunther: But no one can see your fabulous dress out there!

Gunther: I'm going to show off my new girlfriend. Ladies and gentlemen, may I have your attention! I am Gunther!

CeCe: And I am dying inside!

Gunther: CeCe, we're at a dance. Why are we not busting a move and letting it all hang out? You are the best dancer on Shake It Up, Chicago.

CeCe: Aww, that's so sweet of you! Do you really believe that?

Gunther: No, but as my future wife, you must get used to me lying to you.

Gunther: (While slow-dancing with CeCe, as Little Gunther) I'm having a wonderful time.

Gunther: Then this will not work. I am breaking up with you. Have your dress laundered and returned to me.

CeCe: What? No, you can't break up with me, I was only pretending to go out with you!

Gunther: Ok CeCe, whatever excuse you need to save your pride.

CeCe: I slow danced with your puppet! I obviously don't have any pride!

Rocky: What do I know about modeling?

CeCe: Don't worry! I've been working with a modeling coach that I think can help you, too.

CeCe: He was a model in the old country.

CeCe: No, you dingaloo, it was on the Home Sheeping Network! I don't even think the sheeps watch that!

Gunther: Wait! Where will you hide? Oh! At your best friend's lair! The snow leopard!
CeCe: (jumping up and down) That's me! That's my inner cat! (laughs)

CeCe: Wow, you're amazing! You ever repeat that and I'll cut off your legs.

Gunther: Well you could only be as good as your partner. Ever repeat that and I'll hand you the knife.

Gary: It's not Gunther and Tinka.

Rocky: Ha! In your face!

Gary: The winners are CeCe...

Gunther: (to CeCe) Your sleuthing is worse than your dancing.

Reality Check It Up

Gunther: (he thinks that CeCe has a crush on him) I can't say I'm completely shocked. After all, who can resist (he licks his thumb and smooths back his eyebrow) this. (he looks at her)
CeCe: Me! I can resist (she mimicks his action) this.

CeCe: (sits beside Gunther)
Gunther: CeCe, I see you've managed to get rid of everybody so you can be with... Gunther. (he looks at her sweetly and all of a sudden uses breath spray)
CeCe: Gunther, do you honestly believe that I'm in love with you?
Gunther: (he puts his arm around CeCe) The camera doesn't lie, bay-bee. (he smiles and looks at CeCe intimately)

Gunther: Oh CeCe, I love it when you play hard-to-get.

CeCe: You didn't really think you were invited Gunther?
Gunther: Well of course not, I was just dropping off Tinka and taking my new sleeping bag for dry cleaning.

CeCe: How do I look?
Gunther: Slightly insane.

CeCe: I'm happy that you're all here, even you Gunther.
Gunther: Yes, I don't even know what's more pathetic. The fact that I was invited 12 minutes ago or the fact that I even still came?

Gunther: By the way CeCe, there is a very vicious dog by the name of Porky, locked up in your bedroom right now. So happy birthday!

Gunther: Wait! You're having a party and I wasn't invited? What a lousy day, I lost my mail carrier and my friends.
CeCe: Don't worry Gunther, I'm sure your invitation got lost in the mail.
Gunther: Or perhaps my mail man died!

Spotlights Of The Month 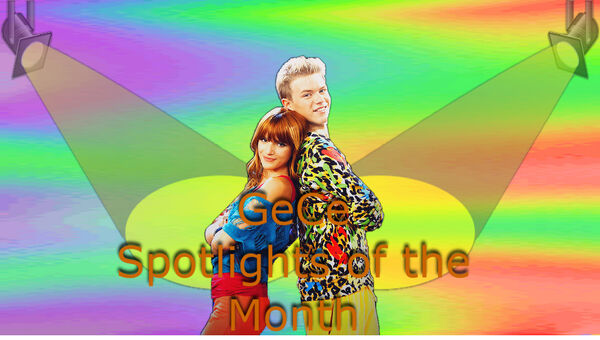 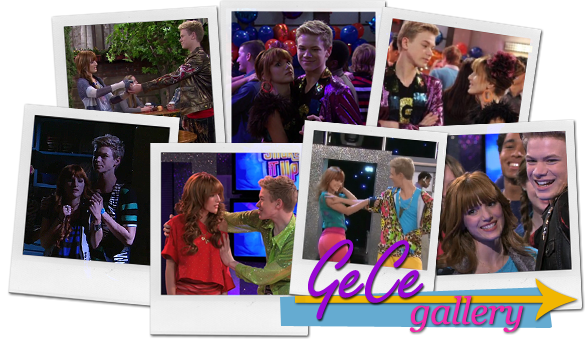 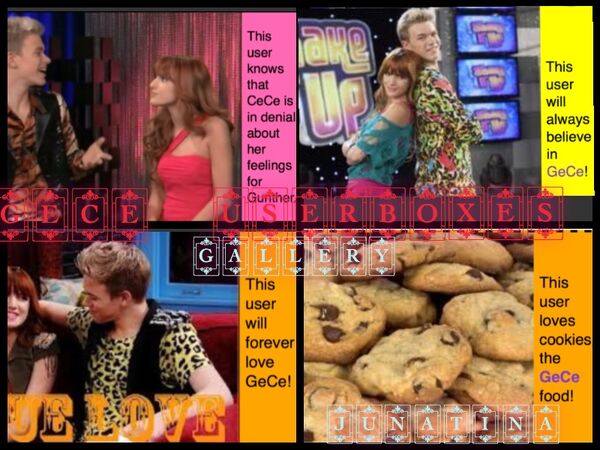 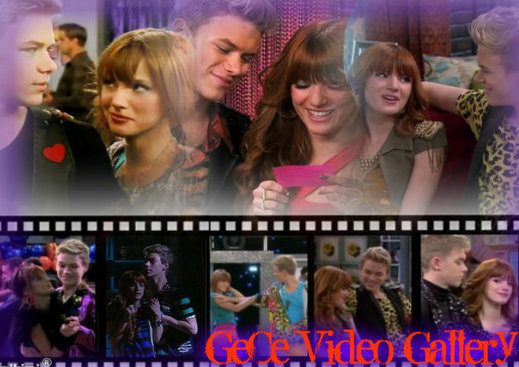 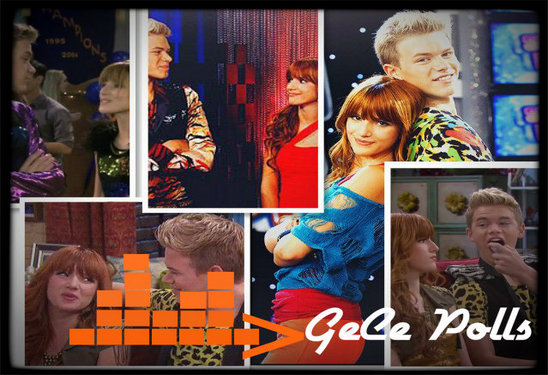 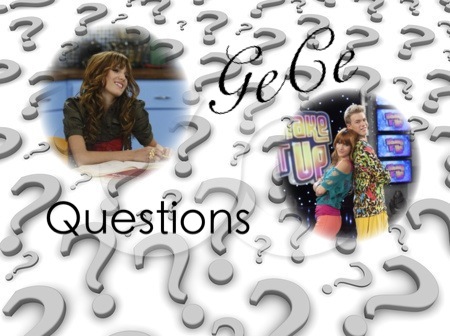 Orgin Of The Couple Name

When the reality show claimed CeCe was in love with Gunther, he kept flirting with her, put his arm around her, and tried to kiss her.

Moment from Episode: Reality Check It Up

Gunther to CeCe: Oh, CeCe, I love it when you play hard-to-get.

Quote from: Reality Check It Up

I've Love You In Every Lifetime - by CloudOfStars 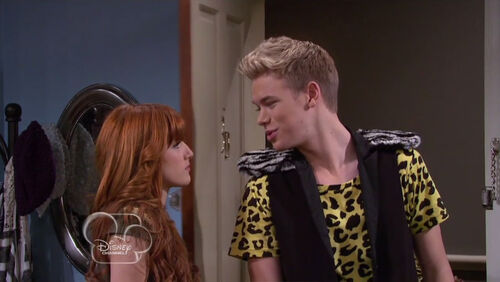 Retrieved from "https://shakeitup.fandom.com/wiki/GeCe?oldid=283417"
Community content is available under CC-BY-SA unless otherwise noted.